Can you imagine spending over 50 hours yearly stuck in traffic? Believe it or not, there are some communities where commuters spend even longer windshield time driving to and from work or school. That is a lot of time you could be using to workout, family time or getting additional sleep.

There is something about being on an interstate or highway where the speed limit is 65-70 mph and you are not moving, you are stuck in traffic and it’s essentially a parking lot. Why is this such an aggravating scenario where an otherwise sane, smart and level headed driver can lose all of their common sense and go berserk?

Texas A&M recently released the results of the Texas A&M Transportation Institute and it revealed we now live in our cars and trucks. On the average Americans spend 54 hours a year stuck in traffic. That’s over 2 days people!

My commute keeps me on US90 and US 167. Daily, I commute approximately 16 minutes each way daily.  Full disclosure, the hours I drive to the radio station keep me out of drive time. I leave my house around 5 in the morning and return home by 3 PM on a good day. I have had my day lasts longer and I had to drive in the 5 PM ride home and 167 and US 90 look like bumper cars. You have 3 lanes at times on US 176 and US 90 and then it narrows to two-lanes. Every car is jockeying to be first in line at the stoplight because we all know how important it is to be the first vehicle at the red light. Then while drivers are ping-ponging from lane to lane to be in the best position at the red light  I realize drivers in Lafayette do not believe in using their turn signal when changing lane. That is my daily commute, share the details of your drive to work or school.  How frustrating is it or maybe you have an easy drive-in. Whatever the case feel free to share the details with us.

The worst cities for commuting are listed below, drivers waste 80+ hours a year, that’s right that is 2 full weeks of work stuck in traffic. The best of the worse cities in 2017 were-

Stop and let those hours roll around in your head for a minute. The study also revealed how much money this costs. These traffic jams cost the individual driver in some cases over $1000 a year. 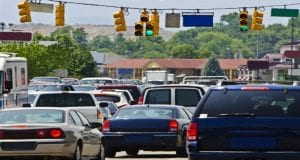 The report also concluded traffic drive times and congestion is on pace to increase by at least 20% in the next 10 years.

The report also concentrated its resources on examining secondary markets.  Here is the breakdown for some Louisiana metropolitan areas.  The intriguing fact from the report was the numbers from New Orleans and Baton Rouge. The two cities were tied in the statistics with the exception of fuel costs, the annual cost is cheaper in Baton Rouge. Note the ranking is ranked nationally for the larger metro’s only.

Now imagine if you what can you do with the additional free time if not for Lafayette traffic not to mention the many other uses of the money wasted on fuel while stuck in traffic.

This is enough to make your head hurt and your wallet sweat. With The New Year Comes A New Concern In Writing 2020→ The Top Cities For Keeping Their New Years Resolutions→