The hard times for LSU’s pitching staff continued on Thursday with the Arkansas Razorbacks showing off their power in a disappointing loss for the Tigers in Fayetteville.

The LSU Tigers quickly got out in front with an RBI double from Antoine Duplantis, but the Razorbacks responded in the bottom of the first with a solo shot from Casey Martin quickly tied things up. Daniel Cabrera briefly gave the Tigers a 2-1 lead with a solo shot, but a two-out, two-run homer from Casey Optiz turned the game on its head.

Arkansas really started to pull away in the bottom of the third with a three-run inning highlighted by a two-run bomb by Dominic Fletcher. The fourth inning saw the Razorbacks really flex their muscles with a solo shot from Trevor Ezell and a grand slam by Jack Kenley being the highlights of a six-run inning.

LSU showed signs of life in the seventh with a solo shot from Cabrera and an RBI single from Josh Smith, but it was a case of too little, too late considering the hole they had to climb out of.

Anytime a team combines for five home runs, that usually spells disaster for any team and that was no exception for the LSU Tigers who couldn’t respond after Arkansas’ offense really got going.

Player of the Game: Dominic Fletcher

Fletcher looked great on Thursday night, going three-of-four with three RBIs on the night, including a two-run home run that helped Arkansas pull away.

Next Up: Friday vs Arkansas; First Pitch at 7 pm 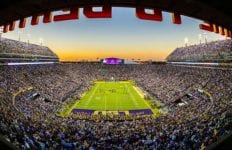