It was an emotional day at The Tigue as the new Ragin’ Cajun baseball head coach, Matt Deggs, was officially introduced. Before Deggs could take the podium UL Athletic Director Dr. Bryan Maggard presented flowers to the wife and daughter of the late Tony Robichaux. As Dr. Maggard held back tears he proudly brought up coach Matt Deggs to introduce himself, once again, to the Ragin’ Cajun community.

Matt Deggs received a standing ovation as he took the podium for the first time as the head coach of Louisiana baseball. He opened with a simple statement of why he and his family decided it was right to return to Lafayette, “This just speaks to the power of love and redemption” said Deggs. “Y’alls love, the Cajun Nation, your love pulled us out of Texas back over here.”

It didn’t take long for coach Deggs to address how he plans to honor the late Tony Robichaux in his time with the Cajuns.  Deggs said, “There will be no bigger honor than having this family (coach Robichaux’s family) ask me to carry coach Robichaux’s torch. None. I would take a bullet for that man and I knew it within the first week I was around him.”

Deggs also brought up the famous ‘Robeisms’ that Cajun baseball fans had become accustomed to. He spoke about one ‘Robeism’ in particular, – we’re looking for dudes who stand up. Deggs went on to proclaim exactly how ready he is to ‘stand up’ for UL baseball, “I’m here and I’m ready to stand up, I ain’t sitting down, its time to stand up.” Deggs continued “I’m here to stand up, roll up my sleeves, punch the card, and get back to the business of Ragin’ Cajun baseball.” 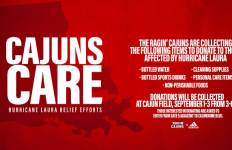 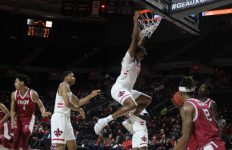