The Louisiana Ragin’ Cajuns had just one mission headed into Monday Night’s matchup was to end the best season in program history on a high note. It’s safe to say that it was mission accomplished after a 27-17 victory in the Lending Tree Bowl over the Miami of Ohio Redhawks.

After a scoreless first quarter by both teams, Miami of Ohio’s offense came alive with a 26-yard run from Tyre Shelton put them into Louisiana territory. The Redhawks took a 7-0 lead later in that drive after a facemask penalty on Chauncey Manac set up a five-yard touchdown run from Jaylon Bester.

The Cajuns offense fired back with a march down the field that was highlighted by a third-and-11 conversion by Levi Lewis, who connected with Calif Gossett for a 36-yard pass to get them inside the Redhawk redzone. However, a false start followed by an incomplete pass to Ja’Marcus Bradley forced Louisiana to settle for a 33-yard field goal from Stevie Artigue to make it 7-3.

After a three-and-out by Miami of Ohio, Lewis led the Cajuns down the field for a seven-play drive that resulted in a two-yard touchdown run from Elijah Mitchell to take a 10-7 lead just before halftime. Louisiana started the second half with the football and marched down the field once again, this time with Lewis finding Bradley in the endzone with a nine-yard touchdown pass to take a 17-7 lead within the opening five minutes of the third quarter.

The Redhawks responded with an 11-play drive that was helped by an 18-yard pass from Brett Gabbert to Jack Sorenson set up a Sam Sloman 39-yard field goal to make it a seven-point ballgame. The Cajuns quickly made it a 10-point ballgame once again with a nine-play drive that only took 2:52 off the clock and was capped off by another touchdown pass to Bradley, giving the senior wideout 10 receiving touchdowns on the season. More importantly, that touchdown made it a 14-point ballgame as the third quarter drew to a close..

The Redhawks kept themselves in the ballgame with Bester finding the endzone yet again after a methodical 14-play drive that was aided by a 14-yard pass to Jalen Walker on third-and-10 to end the third quarter.

After Miami of Ohio forced the first three-and-out of the night Percy Butler stripped the ball out of Bester’s hands before being recovered by Ja’Quan Nelson. The Cajuns were able to take advantage of the short field with 4:35 left in regulation when Artigue drilled another one through the uprights, giving them a little bit of insurance as time began to tick away.

Miami of Ohio had a big opportunity to get within three points on the ensuing drive, but on 4th-and-goal from the one-yard line a botched snap resulted in a 23-yard loss and closed the door on any chance of a rally in the process.

The Ragin’ Cajuns one-upped themselves on Monday night, getting to 11 wins for the first time in program history, over a month after the Cajuns got to ten wins against the UL Monroe Warhawks. Considering the ups and downs of this program, seeing Billy Napier’s team succeed at this kind of level deserves to be recognized.

Player of the Game: Levi Lewis

Lewis continued to get better as the 2019 season progressed and he ended his junior season on a high note, going 19-of-26 for 246 yards and two touchdowns. He also showed off his speed with 62 yards on the ground for good measure. The Lending Tree Bowl MVP earned the honor after his performance. 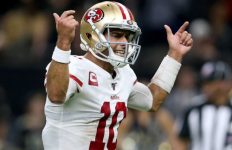